In the 6th Academic Skills class of the Department of Liberal Arts for Career Education (CE), the students learned tips to improve their communication skills in English. They were encouraged to use the words and phrases that they already knew and to not be afraid of making mistakes.

After using non-verbal ways of communicating to express various words, the students described Japanese things to each other in easy English. Even though their grammar and pronunciation may not have been perfect, they were delighted when their classmates could understand them. The students learned that if the other person is able to understand what you are trying to express then communication is achieved!

“I had been studying English since I was a child, but I had never been able to improve, and even though I worked very hard, I could never get any results. I always dreaded English class because of that, and it was traumatic for me because I failed the entrance exam. However, in today’s class, the English was easy for me to speak, which made me want to try my best again, and I thought that I would be able to do it if I found a way that suited me.”

“I was interested in English, but I was not confident because I was not sure if I was really using correct English. I realized that it is important to be proactive rather than thinking about failures, because you can learn by making mistakes and use them in the future.”

“I used to avoid English because it was difficult and I was not very good at speaking it, but through today’s class I learned that even if you are not good at speaking English, you can easily communicate with others by adding eye contact, gestures, and other silent conversations, and even if you make mistakes, you can learn something new.”

Let’s hope they will use these skills in their future! 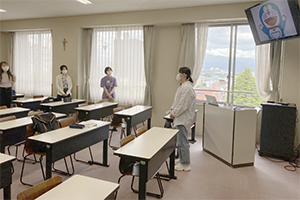